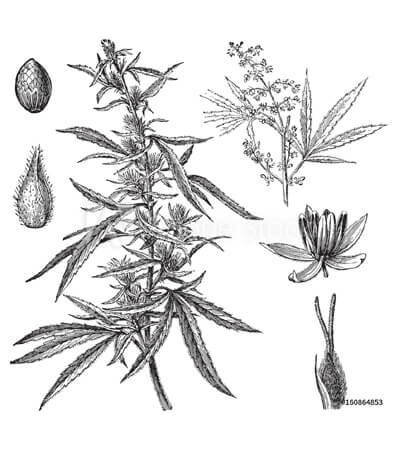 Endocannabinoids (anandamide (AEA) and 2-AG) are compounds naturally produced by the body that interact with cannabinoid receptors (CB1 and CB2). When endocannabinoids bind to their respective receptors, a physiological response is triggered through activation of the endocannabinoid system. The term “endo” indicates the compound is produced within the body while “cannabinoid” highlights their functional similarity to compounds THC and CBD which were previously identified in the cannabis plant and called cannabinoids.

Phytocannabinoids as medicine
The function of ECS can be modulated by endo-, phyto- or synthetic- cannabinoids. A range of scientific, clinical and anecdotal evidence supports the use of cannabinoid in treating different disorders, particularly using the phytocannabinoids cannabidiol (CBD) and tetrahydrocannabinol (THC). These compounds (CBD and THC) are the most researched of the phytocannabinoids due to their abundance within the cannabis plant. However, ongoing research into other phytocannabinoids such as cannabinol (CBN) cannabigerol (CBG), cannabinodiol (CBDL), cannabicyclol (CBL), cannabielsoin (CBE), cannabitriol (CBT) indicates these also may contain unique medicinal properties.

A brief history of the endocannabinoid system.
The history of the endocannabinoid system begun when Dr Raphael Mechoulam identified the structure of THC in 1964. Approximately 30 years later in 1988, scientists discovered a receptor in rats’ brains that was activated by THC. This receptor (CB1) was prevalent throughout the brain and central nervous system. Five years later saw the second cannabinoid receptor (CB2) located in the immune system of rats. With two cannabinoid sensitive receptors identified, scientists attempted to elucidate why there was such a strong prevalence of cannabinoid sensitive receptors.

1992 saw the discovery of the first endocannabinoid, anandamide which activated both cannabinoid receptors but showed a stronger affinity for the CB1 receptor. Three years later, the second endocannabinoid, 2-arachidonodoylglycerol (2-AG) was discovered. This endocannabinoid also attaches to both CB1 and CB2 receptors.

Cannabidiol (CBD) is also known to modulate the effects of THC. Although CBD has a low affinity for the CB1 receptor, it can decrease the affinity of THC at CB1 receptor, reducing the potential psychoactive effects of THC. This may be important to the efficacy of combined cannabinoid therapy (i.e. 1:1 CBD:THC medicines). The complex nature of cannabinoid medicines combined with the potential applications presents an exciting future for cannabinoid research.

The presence of the ECS and the way phytocannabinoids interact with the cannabinoid receptors suggests strong potential for the efficacy of cannabis as a medicine. Also, the diverse range of bodily functions governed by the ECS, indicates the potential disorders that may be treated by cannabinoid medicines. Along with this, ongoing research continues to support the efficacy of medical cannabis and points to the potential for cannabis to become an effective medicine. Cannasouth aims to play a major role in the research and development of novel medicinal cannabis-based therapeutic products.